I am a Stephen Weiss Presidential Fellow and Professor of Ecology and Evolutionary Biology at Cornell University. A recipient of the E.O. Wilson Award from the American Society of Naturalists, my book Snakes: The Evolution of Mystery in Nature (UC Press), won a PEN Literary Award and was a New York Times Notable Book. My recent book, Tracks and Shadows: Field Biology as Art (UC Press) is both an autobiography and a celebration of beauty in nature. More than a memoir, the book is about the wonder of snakes, the beauty of studying and understanding natural history, and the importance of sharing the love of nature with humanity. My primary conceptual interests are behavioral evolution, community ecology, and conservation biology, and I am especially interested in mammals, lizards, and snakes, particularly vipers. Main research techniques include direct observation, facilitated by radiotelemetry, and use of museum specimens for information on distribution, diet, and reproductive biology. My work takes place mostly in Latin America and the U.S.-Mexico borderlands, addressing questions such as the origin of the rattle, factors controlling local and regional species richness, and ways that science enhances nature appreciation. I teach a variety of courses at Cornell including: BioEE 4700 Herpetology, BioEE 1780 Evolutionary Biology and Diversity, and BioEE 6602 Graduate Field Course in Ecology.

My research concerns the behavior, ecology, evolution, and conservation biology of vertebrates. With a focus on how morphology and behavior interact in the origins of evolutionary novelties, and on the reasons for geographic variation in the structure of ecological communities; I seek to understand those topics within an historical evolutionary context, and work primarily with lizards and snakes. Within that evolutionary and ecological framework, I gather information on morphology and natural history from museum specimens (e.g., stomach contents), and use radiotelemetry to assemble behavioral inventories for free-living animals .

My research strategy is to accumulate data on several species at a site, sometimes for several years. From 1982 to 1992 I worked in Costa Rica, in 1993 I studied Amazonian snakes in Brazil with local collaborators, and in 1997 I spent a month in northern Vietnam. Since 1987 I have worked in the mountains of southeastern Arizona, in collaboration with Tucson physician David L. Hardy Sr., and will continue there for the foreseeable future. The Arizona field studies initially focused on foraging ecology of several species of rattlesnakes, but now our efforts have shifted to social behavior. Female Black-tailed Rattlesnakes (Crotalus molossus) remain with their neonates for about 10 days after birth (during which they otherwise could feed); gravid females are secretive and immobile, the research team intercepts during mating and to implant locator transmitters for study during the ensuing summer birthing season, then directly observe mother-young interactions. 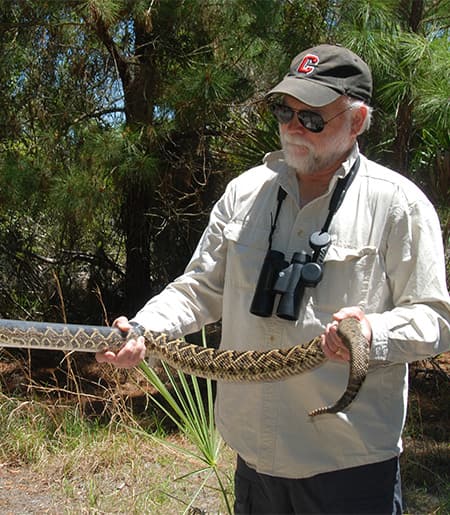