Grovogui is a professor of international relations theory and law.

Teaching Interests
I have two discrete teaching interests. My undergraduate courses are strictly confined to themes in international and global politics that either highlight dimensions applicable to Africa (including their modes of differentiation, hierarchies, and the racial and regional axes along which they can be erected); or African contributions and elucidation on the central themes of global politics: international community, sovereign rights, global justice, and moral subjectivity.

My graduate courses are more directly in line with my research interests in 1) International Relations Theory; 2) Political theory and 3) African Thought.

In this latter instance, my teaching necessarily involves examination of politics and political thoughts in light of advances in historiography, ethnography, and hermeneutics. I am not confined by disciplines. Rather the subject of analysis compels its own methodologies and modes of interrogation. I am therefore open to students and interlocutors interested in African-related themes from any number of philosophical, literary, artistic, or political traditions with one proviso: that the end is to reflect on African contributions to global debates on the nature of politics in the national and global orders. With the support of a number of my colleagues (among them Profs. Taiwo, Grant, Hassan, and Gaines), I hope to attract students interested in literary, philosophical, legal, and political discourses bearing on African existence, no matter the modes of polemicity and evidence. Our focus remains African reflections on the purpose of ethical life and moral existence associated with the African past and present, most certainly modernity and its political, moral, and material economies.

Grovogui is currently completing two manuscripts. The first (nearly completed) manuscript is titled “Otherwise Human: Human and Humanitarian Rights Traditions.” It explores modern idioms and languages that give expression to the ‘human’ as an actualization of moral choices and ethical commitments to others. In this regard, it is deeply indebted to theology and ecclesiastic law, modern idioms of the human as well as related languages of faculties, capacities, and rights received their assumed form between the Renaissance and the Enlightenment. Consistently, it recognizes the role of the late-18th century and early 19th century revolutions in the US, France, and Haiti in giving constitutional substance to the idea of human rights through legal guarantees of association public freedoms (civil rights) and private liberties. Beyond the significances attributed to these revolutions, this manuscript explores the extent to which their encoded freedoms, rights and liberties informed social movements and cultural and political revolutions around the world. A central claim of this manuscript is that alongside the above traditions there emerge other discrete forms either in direct competition or as complement that nonetheless significantly bolstered the idea of protected human faculties and capacities. The Haitian revolution served as segue to my arguments in this second regard. It is my contention that Haiti revolutionaries belonged also to traditions of civil rights and civil liberties that arose directly from slave societies and extended to anti-colonial movements of self-determination. This traditions – and the related conceptions of civil liberties and civil rights – began with the establishment of Quilombo dos Palmares in Brazil (ca. 1605-1694) with Quilombolas’ attempt to define the terms of freedom and civil existence. I am drawn to Quilombolas' imagining of the terms of life, the end of purpose of civil existence, and corresponding institutions. It is significant in this latter that they ‘remembered’ Africa in manners that would also appear in anti-colonial texts. The purpose of the manuscript in this regard to re-open a number of questions, often imagined already settled, on modernity, modern life, and modern subjectivity, alongside questions of universalism and relativism and the operations of time and space on the terms and norms of modern existence. Hence. The aim of the book is to bypass the instrumentalization of human rights discourses in favor of an inquiry into genealogies of conceptions of the human and protected faculties beyond the West that flow from the imaginaries and experiences of colonial and postcolonial populations (in the African diaspora) and thus shaped their dispositions toward and expectations of humanitarianism and human rights laws as they relate to the so-called responsibility to protect and humanitarian interventions.

My second book manuscript (furthest from completion) is the rubric of “Future Anterior: A Genealogy of International Relations and Society”. It examines the ‘past’ of international relations with particular regard to the identities, values, and roles of multiple agents, subjects, and actors in bringing about international society.  While it extensively discusses the institutionalization of Western power, interests, and identity in IR discourses, the project also makes a case for a separation of the historically expressed Western wills, desires, and subjectivities from those projected or embraced by other constituent members of international society.  Specifically, the project reconsiders the idea of ‘international relations,’ particularly its manifestation as a field of study, in light of postcolonial contestations of modern subjectivity and resulting identities and political economies.   Related ‘findings’ are the bases for envisaging a new ethics as well as future political possibilities. The combined purpose of the two projects is to both broaden disciplinary conventions and bring to the fore ideas and intellectual resources of hitherto marginalized actors.

Finally, I have also completed a ten-year long study of the rule of law in Chad, in the context of the Chad Oil and Pipeline Project, funded partly by the National Science Foundation. I hope when I am able to turn my attention to writing up the project to use data opened in the concrete context of Chad to make significant observations on neoliberal applications of the rule of law in Africa as well as the place of Africa in the global political economy. 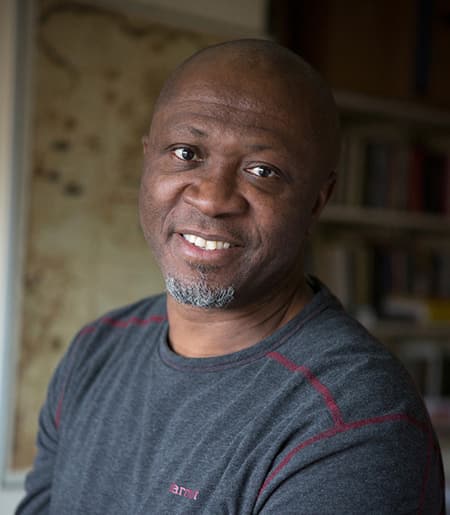