Karen Jaime (Ph.D., Performance Studies, NYU) is Assistant Professor of Performing and Media Arts and Latina/o Studies. A Visiting Fellow at the Hemispheric Institute of Performance and Politics at NYU (fall 2018) and a Woodrow Wilson Career Enhancement Junior Faculty Fellow (spring 2019), Karen is also a former Rockefeller Foundation Research Fellow and a Chancellor’s Post-Doctoral Research Associate at the University of Illinois at Urbana-Champaign. Her book, The Queer Nuyorican: Racialized Sexualities and Aesthetics in Loisaida (NYU Press, 2021), uses hip-hop studies, alongside critical race, queer, literary, and performance theories in order to demonstrate the ways in which historically pejorative identity markers are recuperated and recodified as useful tools in the development of contemporary aesthetic practices. Her critical writing has been published in Women and Performance: A Journal of Feminist Theory, e-Misférica, Small Axe: A Caribbean Journal of Criticism, and TSQ: Transgender Studies Quarterly.  In addition to Karen’s critical writing and research, she is also an accomplished spoken word/performance artist. She served as the host/curator for the Friday Night Poetry Slam at the world-renowned Nuyorican Poets Café, participated in the spoken word documentary Spit!, and was featured in the Emmy-award winning CUNY-TV program Nueva York, a show focusing on the different aspects of Latina/o/x culture in New York City. As a published poet, Karen’s work is included in The Best of Panic! En Vivo From the East Village, Flicker and Spark: A Queer Anthology of Spoken Word and Poetry, in a special issue of Sinister Wisdom: A Multicultural Lesbian Literary and Art Journal, “Out Latina Lesbians,” and in the anthology, Latinas: Struggles and Protest in 21 Century USA. 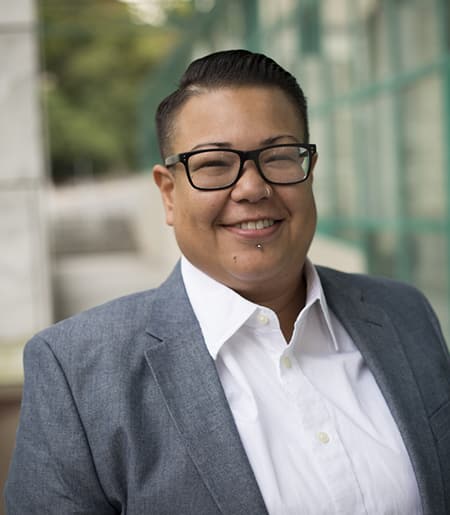