Why does the Standard Model work? What is beyond the Standard Model? We already know there must be physics beyond the SM because we see that there is dark matter in the universe, that neutrinos have masses, that there is far more matter than anti-matter, and so forth.  These issues have led physicists to invent countless scenarios for New Physics, scenarios which sometimes require additional spatial dimensions, sometimes new "fermionic" dimensions of spacetime, and invariably predict new particles and new interactions. But until we get enough data from very high energy collisions, we can't know what the right scenario is. Even then we will have to work very hard to figure out what the data are telling us!

We are doing that now. Working at the Large Hadron Collider at CERN, the Cornell particle physics group is focusing heavily on the search for New Physics.   Here are just a few of the things which interest me most and dominate my research directions:

If the new physics is Supersymmetry (this is where the fermionic spacetime dimensions come in) then what are the masses of the neutralinos and charginos? What are the best strategies for extracting these signals from the data? Where in the vast parameter space of Supersymmetry does the pattern of masses seem to put us? Is the lightest neutralino a possible candidate for the Dark Matter of our universe?

If the new physics is the existence of "extra" spatial dimensions, can we distinguish this from Supersymmetry? Many of the phenomena will look rather similar, especially in LHC data. Will our initially very limited view up the Kaluza-Klein towers allow us to count the number of extra dimensions or measure their size, even roughly? What is the dark matter candidate in this case? What symmetry keeps it from decaying, and can we see evidence for this symmetry?

What can we learn from the top quark?  It is so much heavier than the other quarks, heavier even than the Higgs boson, yet similar to the others in its interactions and quantum numbers. Is there a hidden message somewhere?

Could dark matter be something even more bizarre than a neutralino?  Could it be the manifestation of an entirely different kind of matter, perhaps with its own interactions, but with little or no interaction with normal matter (other than via gravity)? If so, maybe it has its own kind of electromagnetism, and its own photon: a “dark photon”. Can we find such a thing?

These questions are just some of the many that one could pursue. They attract me both because of their close connection to cosmology and the unresolved identity of dark matter (which plays such a crucial role in the evolution of the universe), and because of their access -- their experimental access -- to the staggeringly fundamental question of what spacetime actually is, and how many dimensions (of what type!) there are in the universe we inhabit.  And what else might be inhabiting this strange place.

As a starting point in this vast landscape of questions and unknowns, I began working on the problem of mass determination of New Physics particles produced under conditions where incomplete information severely complicates the problem of mass measurement.  Two graduate students, Nic Eggert and Nathan Mirman, and two undergraduates, Ben Nachman and Adam Dishaw have carried out these studies, using the top quark as a test bench.  We are now extending the studies with increased focus on the top quark itself, and new help from graduate student Shao Min Tan.  Four undergraduates are or have been engaged in these programs: Caroline Aust, Jared Claypoole, Xiaoyue (Mandy) Guo, and Yimin Wang.

In the background, I am thinking about possible new experiments for dark photon searches, and have a continuing interest in some ILC accelerator diagnostics.  Undergraduates Yimin Wang, Brian Shin, Cari Cesarotti, Joon Park, and Evind Niklasson have contributed extensively to the dark photon work.  Further in the past, undergraduates Mickey McDonald and Hongwan Liu made contributions to the X-ray Beam Position Monitor (for ILC accelerator diagnostics), as did graduate students Walter Hopkins and Nic Eggert.

I also enjoy outreach projects and have a strong commitment to our undergraduate research program. 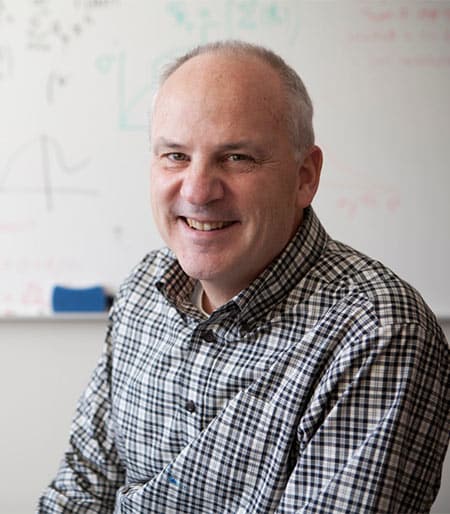