Professor Fine received her PhD from Harvard in 1975, and joined the Sage School in the same year. Her main interest is in ancient philosophy, but she is also is interested in the rationalists and empiricists, and in epistemology and metaphysics. In recent years, she has taught courses on the rationalists, on conflicting appearances, ancient skepticism, and Plato's metaphysics and epistemology. She received Cornell's Clark Award for Distinguished Teaching in 1992. In 1998-1999 she was a Fellow at the Cornell Society for the Humanities. She is currently working on a cluster of issues centered in ancient epistemology, especially in Plato, Aristotle, and Sextus Empiricus. She currently spends the spring semester in Oxford, where she is a Senior Research Fellow in Merton College and a Visiting Professor of Ancient Philosophy in the Faculty of Philosophy. 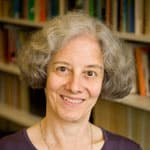