She is the holder of a Stephen H. Weiss Presidential Fellowship, which is Cornell University’s highest teaching award, and is granted for excellence in undergraduate teaching. She regularly teaches courses on Latinx, Border Studies, and Migration issues for both graduate and undergraduate students.

She is deeply involved with community engagement projects and courses, especially in collaboration with the local organizations, Cultura Ithaca https://www.culturaithaca.com and No más lágrimas https://nmlagrimas.wordpress.com and has regularly taught a profoundly engaged course, “Cultures and Communities” in collaboration with these and other partners in the Ithaca community.

The mission of all this work is to share Latin American and U.S. Latino/a/x culture with community members of all ages through educational artistic activities. Our current project, funded by a grant through the Cornell Rural Humanities initiative of the Andrew W. Mellon Foundation is “Youth Voices/Voces de la Juventud” where Cornell grad and undergrad students are working in collaboration with Anacheliz Gonzalez.  The program has several facets, but the most central is a youth art creation and exhibit for mid-later 2021. Youth will work with youth and adult mentors throughout Summer 2021 to create handicraft projects or art works in any genre:  painting, sculpture, creative writing, film, fiber arts, etc.  This project will culminate in an art show and sale, with proceeds going to the artists, during Latinx Heritage month in September 15-October 15, 2021.

Perhaps the course with which she has been most identified over the years is “Hispanic Theater Production.” http://instruct1.cit.cornell.edu/courses/spanl301/ She has taught this course regularly except when on leave for nearly 30 years, and coordinates summer productions as well on a volunteer basis.  Graduate and undergraduate students, as well as some community members participate. Under the troupe name “Teatrotaller,” two or three times a year the group chooses a play from a Spanish, Latin American, or US Latino/a/x writer in Spanish or Spanglish, or—increasingly—develops original plays through a collective creation process.   We then bring the plays to full production (generally presented in August/September, November, and April). The group has achieved an international reputation for excellence, and has accepted invitations to present their plays in various regional universities (Tufts, Penn State, Barnard, Syracuse, Texas-El Paso, Kansas State) in festivals in Mexico, Canada, Israel, Ecuador, Romania, and Belgium, and has toured in the USA, Mexico, and India.  COVID forced us to defer our 2020-early 2021 projects but we are looking forward to developing new community collective creation plays for live performance in late 2021, as well as a reboot of our popular Christmas “Pastorela.”

Debra Castillo is the author, co-author, translator, or editor of a couple of dozen books and approximately 150 scholarly articles. She specializes in contemporary narrative from the Spanish-speaking world (including the United States), gender studies, and cultural theory. Her most recent books include South of the Future: Speculative Biotechnologies and Care Markets in South Asia and Latin America (with Anindita Banerjee) and The Scholar as Human(with Anna Sims Bartel), Centering Borders: Narrative Explorations in South Asia and Latin America (with Kavita Panjabi and Debaroti Chakraborty), Latin American Literature in Transition (with Mónica Szurmuk) and forthcoming books with Liliana Colanzi (on horror in Latin America) and with Melissa Castillo-Planas (on public engagement in COVID times).

She is an active member of the editorial boards of many journals, and is also Editor of the Latin American Literary Review, past editor of Diacritics, and the former Book Review editor for Letras Femeninas.  She is past president of the the Latin American Studies Association and the Asociación Internacional de Literatura y Cultura Femenina Hispánica, serves or has recently served on the boards of the Cornell University Press (where she co-edits a series on Publicly Engaged Scholars), the North Carolina Series in Romance Languages and Literatures, and the State University of New York Press (where she co-edits a series on Genders in the Global South).

Debra is profoundly committed to mentoring at all levels, and is amply compensated through sustained dialogue with exciting young scholars. She has enjoyed the privilege of working closely with over one hundred graduate students (mostly PhD), and has been the chair or co-chair of a little over sixty graduate student committees.  While not everyone has chosen an academic career, most of her former students have ended up teaching and doing research in some combination.  Some of them are located in far-flung sites like Kolkata, Seoul, or Buenos Aires; most are in Spanish programs in the United States, including people at liberal arts colleges, state universities, and distinguished private research institutions.

The Translated World:  A Postmodern Tour of Libraries in Literature.  Tallahassee:  Florida State UP, l984.

Talking Back:  Toward a Latin American Feminist Literary Criticism.  Ithaca:  Cornell UP, l992.

Trans. and Intro., Tijuana:  Stories on the Border by Federico Campbell.  Berkeley:  U of California P., l995.

ed, with Kavita Panjabi.  Cartographies of Affect:  Across Borders in South Asia and the Americas. Kolkata: Worldview Press, 2011. 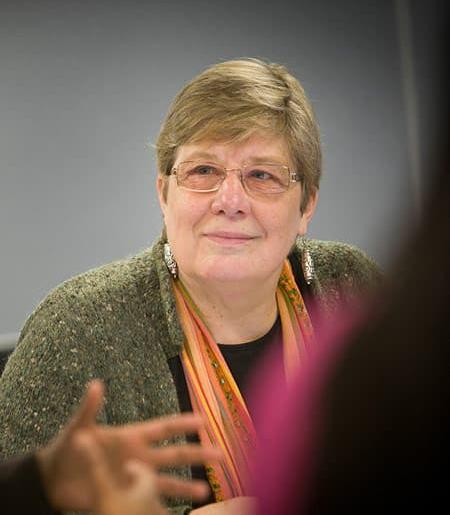